Get to know Jarrod and Ursula

Jarrod and I (Ursula) Godson are the owner/operators of Reel Screamin Barra Fishing. We have built a reputation of being one of the premier Barra Fishing Charters in the Top End

We take great pride in offering our clients a memorable NT experience. Not only with fishing but the stunning birdlife including jabirus, brolgas, whistling and burdikin shell ducks, white breasted sea eagles just to name a few. It is common to see crocodiles both salt and fresh water. You will also see buffalos, agile wallabies and the odd dingo roaming the shores whilst fishing. Not only is it a memorable NT fishing Safari but a tour with one guide for up to four enjoying the wonderful wildlife and scenery unique to the NT.

A Bit About Us

Jarrod and I started Reel Screamin Barra Fishing to fulfill our passion for fishing. As they say if you enjoy what you are doing you will do it well.

I grew up in Western NSW fishing the Rivers chasing yellow belly and cod. I also fished the mid-north coast. When I got a chance, I would chase jewies and flathead on lures and plastics. After a trip to the Top End in the late 90’s, I fell in love with the Territory lifestyle, particularly the fishing and wildlife. After being a contractor throughout Western NSW and meeting and working with all sorts of people from CEO`s of Agricultural companies right down to general work hands moving from that and being a keen fisherman and a love for the Territory Lifestyle, it only seemed natural to start a fishing operation to share this with other people. After guiding in the Territory for over 8 years and recreational fishing for the past 15 years, I still enjoy seeing punters get their first barra weather it be a smaller one or their first metre barra which they have either been chasing for years or lucky enough to get on their first trip.

I also grew up in Central West NSW and later starting my working life in Sydney and working in the Finance industry for over 10 years, I have always been keen to fish, from catching yellowbelly and catfish out of our local river every week, or spending holidays at the coast fishing with my family and later fishing on weekends in Sydney. Like Jarrod after a trip to the Top End in the late 90’s, I too fell in love with the Territory Lifestyle and after catching my first barra I got hooked. This in turn sparked Jarrod and I to set up Reel Screamin Barra Fishing. 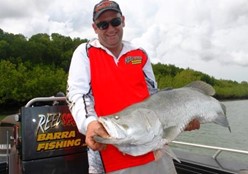